Rhinoplasty is a popular procedure designed to recontour the nose for functional and/or cosmetic purposes. Often simply referred to as “nose surgery” or a “nose job,” rhinoplasty can create more aesthetic balance in the face by making the nose larger or smaller, smoothing a hump on the nasal bridge, enhancing the angle of the nasal tip, or adjusting the width of the nostrils. The procedure can also repair breathing problems caused by a deviated septum. If you are interested in rhinoplasty, plastic surgeon John Ayala, MD can develop a treatment plan to achieve your goals and improve your facial harmony in relation to your surrounding features.

Simply stated, rhinoplasty is a nose reshaping procedure designed to change the bones, skin, and cartilage of the nasal framework. This is performed to balance the rest of your facial features or to improve breathing difficulties caused by an issue with the internal structures of the nose. In the video below, Dr. Ayala provides an introduction into rhinoplasty at our practice, and we encourage individuals interested in the procedure to familiarize themselves with the process:

What Concerns Can Be Treated With Rhinoplasty?

Rhinoplasty can reshape the nasal bones and cartilage to create more proportion in your facial features. Depending on your concerns, the procedure can be performed to correct common aesthetic issues like:

In many cases, a small or slight change in the nose can have a substantial impact on the rest of the face. Dr. Ayala can personalize the rhinoplasty procedure to increase nasal symmetry, improve the profile of the nose, and/or balance the shape of the nose with the rest of your features. If your airways are blocked by an obstruction, Dr. Ayala can also realign your nose to optimize breathing.

Am I a Candidate For Rhinoplasty?

Like all cosmetic surgeries, rhinoplasty is most successful for patients who maintain realistic expectations of what the procedure can achieve. Exploring before-and-after photos from previous rhinoplasty procedures can help give you an idea of the results that are possible with aesthetic nose surgery. Good candidates for rhinoplasty are generally:

Most importantly, patients interested in rhinoplasty should be pursuing the procedure for themselves, and not to fulfill someone else’s desires or ideals of beauty. Dr. Ayala will speak to you about your goals and reasons for surgery during your consultation. He will explain the risks and limitations of rhinoplasty, as well as go over surgical details such as techniques, recovery, and scars to help ensure you have a thorough understanding of the procedure.

What’s the Difference Between Cosmetic and Functional Rhinoplasty?

Rhinoplasty can successfully resolve both functional and cosmetic issues pertaining to the shape of the nose. Although the procedure is performed to correct both types of concerns, different techniques may be used based on your unique reasons for surgery.

For example, performing functional rhinoplasty may involve addressing the septum to improve airflow or making other corrections to the nasal valve. The need for functional enhancements may be caused by a facial injury, weakened cartilage in the nose due to aging, or your genetics. In either case, the approach utilized to repair the nasal structures — such as tissue grafting and turbinate reduction — may deviate from the techniques used to improve appearance. That said, cosmetic and functional rhinoplasty often go hand in hand — meaning the techniques performed during either procedure can typically yield benefits to both form and function.

In general, rhinoplasty can utilize either open or closed incisions to access the nasal framework. The open technique places an incision on the natural crease of the columella, which is the strip of tissue between the nostrils. This location offers optimal visibility and control in reshaping the nasal bones and cartilage. However, in some cases, the closed incision may be a better technique to achieve your goals. Closed rhinoplasty utilizes an internal incision and offers the benefit of little to no external scarring. This approach is only suitable for a select number of rhinoplasty procedures, but rest assured Dr. Ayala places incisions discreetly in either case for inconspicuous post-surgical scars.

How is Rhinoplasty Surgery Performed?

During your consultation, Dr. Ayala will go over the unique details of your procedure, such as which incision is the best technique for your goals. He typically performs rhinoplasty as an outpatient procedure utilizing IV sedation, which patients often report is more comfortable than general anesthesia. If your treatment plan involves decreasing the shape and/or size of the nose, refining the nasal tip, or removing a hump in the nasal bridge, Dr. Ayala will separate the overlying skin and subsequently reshape the bone and/or cartilage. The skin is then re-draped over your new nasal structure and incisions are closed. In cases where flared nostrils are being addressed, Dr. Ayala will make a discreet incision on the undersurface of the nose. 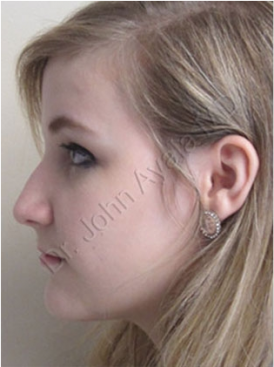 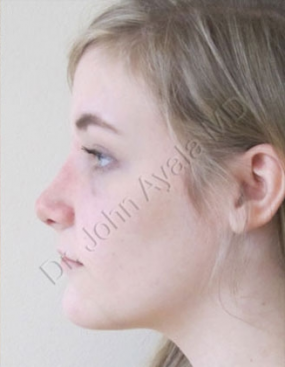 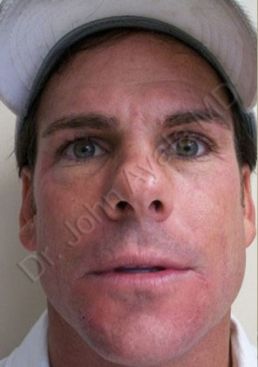 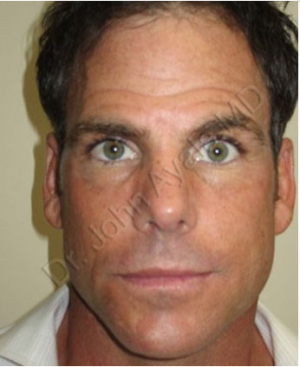 Following rhinoplasty, a lightweight splint is placed to protect the nasal structure and help facilitate the new contours of the nose. Swelling and bruising is common after the procedure, but should gradually resolve as your nose begins to heal. Most patients return to non-strenuous work within one to two weeks, but strenuous work and exercise should be avoided for at least four to six weeks. To reduce swelling, Dr. Ayala advises sleeping and resting with the head elevated above heart level. You will be provided with more detailed post-operative instructions when Dr. Ayala sees you in person. Most swelling should dissipate within three months after your rhinoplasty procedure, although it may take up to one year to see the final outcome.

How Long Do Rhinoplasty Results Last?

Rhinoplasty should provide a lifetime improvement and the results are typically stable as long as patients do not sustain a nose injury. Most people who undergo rhinoplasty report that the new facial balance achieved after their procedure enhances their entire appearance. It often takes six months to one year for all swelling from nose surgery to resolve, so some patience may be required before the final outcome reveals itself. Since rhinoplasty permanently alters the underlying nasal framework, there’s usually no need for retreatment. Factors such as suffering a broken nose after rhinoplasty or a complication arising during the recovery process may warrant a second procedure, but these events are relatively uncommon.

Will I Have Visible Scars After Rhinoplasty?

With both the open and closed technique, rhinoplasty typically produces very inconspicuous scarring that is well-concealed—if not undetectable—to outside observers. If an incision was made on the undersurface of the nose, the resulting scar can often blend into the natural crease where the nose meets the upper lip. For patients whose procedure utilized a closed incision, there should be virtually no external scarring after the procedure. In any case, Dr. Ayala is very careful to place incisions so that the outcome of surgery looks as natural as possible. After your procedure, he will also provide post-operative instructions to encourage the best possible healing of your incisions. This can increase the likelihood of any scars fading to some extent over time.

How Much Does Rhinoplasty Cost?

Rhinoplasty can cost anywhere from $5,000 to $10,000 depending on your location and the experience of your plastic surgeon. The details of your treatment plan will also affect the total price, such as:

Ultimately, our patient care coordinator will provide you with a personalized cost estimate once your needs are assessed in a consultation. Ayala Plastic Surgery offers plastic surgery financing for qualified applicants through CareCredit®, a highly trusted healthcare lending company that allows patients to pay for their treatment through low monthly installments. For patients who pursued rhinoplasty to improve breathing issues, some medical insurance plans may provide partial or full coverage for certain costs. If you have any questions, our office team would be happy to speak with you about your concerns.

Can I Get a Rhinoplasty Without Surgery?

There is no way to permanently recontour the framework of the nose without surgery; however, some non-surgical options can still temporarily enhance the size and/or shape of your nose. Namely, dermal fillers have proven to be a simple, effective med spa treatment that can straighten bumps in the nasal bridge and provide slight augmentation. Sometimes referred to as a “liquid rhinoplasty,” this treatment involves meticulous injections of JUVÉDERM® or RADIESSE® to targeted regions of the nose based on your cosmetic goals. While this cannot offer long-term improvement, fillers can be an excellent way to rejuvenate your appearance before an event or special occasion. Dr. Ayala or our licensed nurse injector can give you additional details about a liquid rhinoplasty during your consultation.

When can I blow my nose after rhinoplasty?

The nose may feel congested or swollen immediately after rhinoplasty, so our team understands the desire to blow your nose following surgery. That said, you will be advised to avoid blowing your nose for at least 10 days or until Dr. Ayala instructs otherwise. Blowing your nose prematurely can disrupt the internal tissues of the nose and cause bleeding or other complications, so it’s essential to wait until the nasal structures heal. The exact timeframe in which you should exercise caution will depend on the nature of your procedure. In the meantime, you can carefully clear your nose of congestion using a saline nasal rinse and Dr. Ayala will provide you with additional information about post-operative care in person.

How can rhinoplasty improve breathing?

If there are obstructions or misalignments in the nose causing limited airflow, rhinoplasty can reposition or remove the internal strips of cartilage/tissue to increase breathing function. In many cases, this is done in the form of straightening a deviated septum; however, the necessary corrections may be completed using other techniques as well. Your nose will be personally examined for irregularities or potential concerns, after which a treatment plan can be created based on your physical evaluation.

Is rhinoplasty performed the same for men and women?

Rhinoplasty is individually tailored to the needs and goals of each patient, regardless of whether they are male or female. However, men and women have ideals of beauty unique to each gender, as well as distinct anatomical differences, that will likely inform your procedure. While men often have wider nostrils and a broader nasal bridge, women typically exhibit a relatively more narrow bridge with increased projection of the nasal tip. Factors such as these will influence how your surgery is performed, but rhinoplasty is ultimately completed with the goal of producing a natural-looking result for each patient.

Feelings of inflammation, bruising, tenderness, and general discomfort are common after rhinoplasty, which can often be alleviated with over-the-counter medications. Swelling may come and go for months after the procedure, but should gradually subside as the healing process progresses. Congestion and a “stuffed” up nose may also occur. Rest assured that Dr. Ayala will walk you through what you can expect after surgery so you can better prepare for the recovery period.

Rhinoplasty can be a highly effective cosmetic surgery to achieve a more balanced, harmonious facial appearance. If you are ready to schedule a consultation, or if you would like to learn more about our other facial plastic surgery procedures, please contact our practice today.